The latest research from Telephia shows that around 4 % of U.K. mobile users have uploaded content created on their mobile phones to social networking sites, video and picture sharing sites, blogs and personal web pages.

Still, uploading content from mobile phones is not yet mainstream, probably because of the still expensive data plans for using the mobile web. But Telephia says it is already ranking close to watching mobile video in popularity. An interesting fact is also that users are finding ways to send their content even to sites that do not yet offer a facility to upload direct from mobile phones. That shows the strong demand mobile and should be integrated into social networking services. 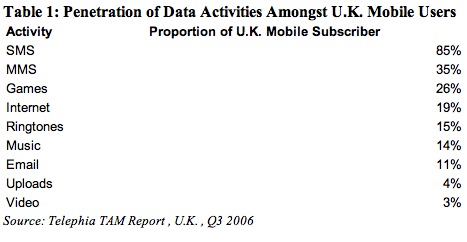 “Social networking sites have taken the web by storm. Eighty-five percent of U.K. consumers are using text messaging to stay connected to their peers at all times and more than 80 percent of new phones sold are camera phones. Put this together with Vodafone and O2’s declared interest in offering mobile services from MySpace and Bebo, and you can see why social networking in the U.K. will spread from the PC to the street in 2007 and beyond,” says Reza Chady , Telephia’s managing director for Europe. 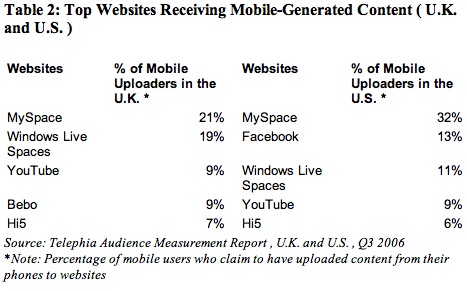 As written in my earlier post “The new meaning of social networking sites” I am pretty sure that we will see a lot of new mobile social networking services in 2007/2008. The advantage of the mobile phone is that it combines the (mobile) internet with the communication component. If users can use all the advantages of the mobile phone within a mobile social networking service, those networks will be more alive and valuable. Users can contact their buddies or co-workers right away and in different ways (SMS, call, instant message etc.)