When hundreds of bean bags, big and small Daleks, The Beatles Rockband, Gears of War 2 and hundreds of geeks interested in mobile technology come together, it can only be Over The Air!
This year’s OTA in London was a great event, both in terms of the sessions held and in terms of the organization of the event. Daniel Appelquist’s team succeeded in gathering a batch of speakers who were able to cover a diverse, yet focused set of topics - thanks a lot for all this!

So what were all these experts and enthusiasts talking about? Widgets and app stores of course!

We enjoyed many interesting sessions and right from the keynotes by speakers from OMTP/BONDI, Vodafone and WIP one thing was clear: mobile widgets and application stores are what the mobile industry is all about right now.

For us at PavingWays this is not different, ever since we thought mobile widgets would make the mobile web more ubiquitous we have been looking at this area very closely. 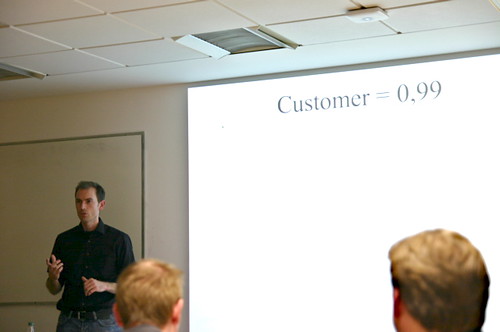 Our session at Over The Air accordingly covered the current landscape of mobile application stores and widget engines that are available to developers, as well as the standards related to them.
We were able to spark a lively discussion, and not only due to high sugar levels amongst our audience caused by the chocolate we were handing out ;)

Insights to be gained from our session entitled “Mobile Widgets - Worth the Hassle?” were that it is currently hard for developers to decide which app stores and related widget engines to bet on.
There is a lot of fragmentation in both widget engines and app stores. Factors that enable developers to determine which app store to go with are therefore very important. Some factors named during the session were: potential user reach, porting requirements and billing options. It was also generally seen safer to go with widget engines relying on the emerging W3C and BONDI standards.

A newly created wiki contains our research results in the area of application stores and mobile widget engines and we would like to invite anybody who wants to use it or who wants to contribute to do so! It would be great if you would add additional information or corrections, if you don’t want to register, please send it to our twitter account: @pavingways.

As mentioned, the W3C and BONDI standards were also big topics at the conference, there was also a bit of augmented reality (Dan mentioned Wikitude quite a lot) and of course Vodafone 360 which was announced the day before OTA started. We had a chance to see 360 on an actual device and it looks very good so far (more to come on this topic here soon).

Since Over The Air also consists of a hacking contest where developers have 24 hours to create something interesting, we saw some really great projects at the end of the event and that was about it.
Oh and the stage almost caught fire during the very last “presentation”, Project Holodeck by Ewan Spence, who happens to have found a good tweed bout this too on twitter: Project Holodeck by @ewanspence stunned the #ota09 audience into 7 minutes of Twitter silence.

Thanks again for putting this great event together and till next time!