Recently, Opera released its new “State of the Mobile Web 2009” report and revealed that they had one of their largest monthly increases ever in January 2009. Opera Mini now has more than 20 million users. Those users viewed approximately 7.6 billion pages in January. Page views and data transfers increased 18% month-over-month. That means, not only more people are using the mobile web, but they also use it more often.

The mobile Web usage is booming in developing countries. Among the top 35 countries using the browser, Armenia, Nigeria and Egypt showed the most growth between January 2008 and January 2009 in terms of unique users. The most significant growth (2800%) was in Armenia (a country with 3 million residents). On average Armenians surfed 669 pages per user in January and that is far more than it is in other countries.

“Looking back on a full year of mobile Web growth, it is easy to see why mobile devices will become the primary device for Web usage in most of the world,” said Jon von Tetzchner, Opera’s CEO, in a statement. “Developing countries may lead the way due to the sheer prevalence of mobile devices versus PCs, but the solid growth rates in developed countries such as the United States, the United Kingdom and Germany, show the entire world is moving in this direction.”
Here are some more highlights from the report:
(You can compare these results with the previous “State of the Mobile Web” from 2008) 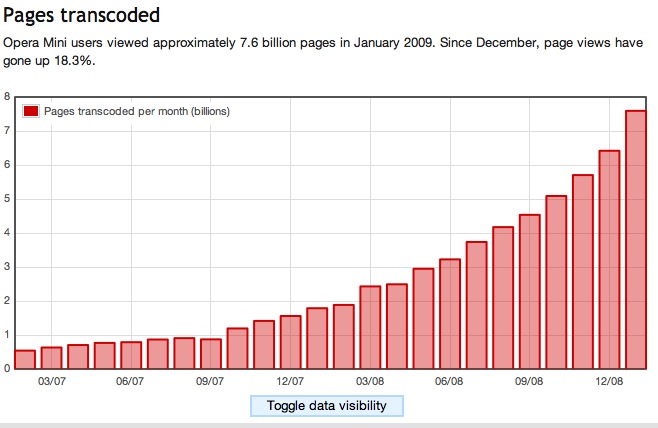