This was my first presentation at a conference except a lightning demo at this year’s XTech conference about CarCulatr (price finder for used cars to demo mobile AJAX using Opera Platform) and I have to say it could not have been worse…
We learned a big lesson this day: prepare, prepare well!
Michael planned on showing a demo of Soonr, one of the first Mobile AJAX applications (unfortunately only works on the Mobile Opera Browser) on a Nokia N93, which has a TV-out connector. He had the phone shipped to the hotel 2 days before, but unfortunately some clever guy at Opera forgot to include the TV-out cable. Unable top find a shop to sell those cables he ended up showing the mere phone to the audience and focusing more on his slides - oops there was the second problem.

My crappy old laptop sometimes goes on standby and forgets that it it equipped with USB ports, so I fiddled around for about 10 minutes to reboot the thing and pull Michael’s slides off a USB stick - oops third problem - the slides were not on it. Apparently Michael’s somehow managed to not copy his slides to the USB stick and we ended up having nothing to start with.

After Michael had expanded his introduction to about 20 Minutes, I continued with my presentation, which apparently went not too bad (haven’t read otherwise yet). When I asked the audience if everybody knew ”.mobi” I was a bit surprised to hear somebody yell ”dotmobi is evil!” - as it turned out it was Paul Downey. We ended up having a little discussion/explanatory session after my talk.

Lessons learned, except the big one mentioned above, include that it is not as difficult as I had imagined it to be to present on a conference and that nobody will rip your head off if something goes wrong - not even at ”The world’s oldest and biggest XML conference”.

I thank everbody at the conference commitee for allowing me to speak there and especially Michael for giving me this chance. I hope there will be more presentations to come, because it is just the best way to make yourself heard and to get people to respond to your thoughts.

In my talk I was refering to our Mobile AJAX demo application, an event finder for the conference. Please read this separate post about it! 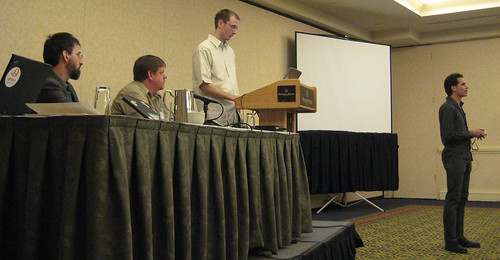