It has been very quiet around here for a while – over two years have passed since our last blog entry. Now we’re redefining, tightening and updating PavingWays and we made some changes to our blog too.

We transferred the old pavingways.com from a self-hosted and heavily modified WordPress installation to a Jekyll/Octopress blog on GitHub Pages. The page is additionally delivered through CloudFlare as we had CF set up before and it had proven to be reliable and fast.

The whole migration process went relatively smoothly however I had to make some adjustments here and there.

Before we settled with Octopress I tried Ghost and Jekyll directly, so it was clear I would need to have our old posts as Markdown files or HTML if everything else would fail.

So I wrote a PHP script that exported all of our old WordPress posts to Markdown files using an old PHP class called Markdownify. Trouble was that this class needed way too many adjustments and I never was satisfied with the results, so I discarded wanting to have ALL posts in Markdown and decided to go with the Jekyll importer which produces HTML files. The process looked simple and roughly goes like this:

Guess what … this did not work and first I got this:

This is caused by some missing gems and you should “gem install” htmlentities, sequel, mysql and mysql2 just to be sure.

Some more playing around with this revealed that apparently the command line suggested on the Jekyll importer page is/was simply wrong see my bug report: The importer consists of several sub-importers for various systems and for wordpress there are two – one for self-hosted blogs and one for blogs on wordpress.com.

I had no local DB of my old blog at hand – unfortunately the wordpress importer requires one in contrast to above command line example. That was initially not clear to me and I already had my WXR file …
And so I went with the wordpressdotcom importer, also because I found a blog post on the matter and tried another command line (also contained in the Jekyll importer docs) which works:

Basically I could also have done this and had saved some time, oh well:

Now I had all my files in _posts as I wanted. My remaining issues with the wordpressdotcom importer were as follows:

In my first stab at Ruby source code ever since I read this Rails book in 2005 I changed the jekyll-import Gem (the file is called wordpressdotcom.rb) so it did all of the above and finally I was happy with my old post files.

Some changes to the default Octopress theme and (S)CSS I had a working site and especially all of our old blog posts on GitHub.

The same WXR file I used for importing our old post can be used to import all comments to Disqus. Details see this blog post again. The import worked alright, however I did not see any comments in the Disqus box below our posts.

As it turns out I had to do a domain migration in Disqus (Discussions –> Tools) in order to see all my old comments. Strangely this required me to migrate from my (unchanged) domain pavingways.com to pavingways.github.io so they now appear in Disqus like this:

I had no time digging deeper but apparetly disqus realizes that my page is hosted on GitHub. Finally all comments show up and we have a working blog again.

Octopress’ rake commands make it now simple and easy to write/debug posts and deploy them to GitHub.

Auf unserem englischsprachigen Blog finden Sie einen etwas umfangreicheren Artikel zu diesem Thema. Hier geht’s zum Artikel.
Apple has announced that it allows businesses to purchase apps in volume. With the Volume Purchase Program the buyer can choose an app, determine the needed quantity and complete the purchase with the corporate credit card. The buyer then receives redemption codes which he can send out.

The Volume Purchase Program is only available in the US. Every paid app in the App Store is available for businesses to buy in volume. Free apps are excluded.

Businesses need first to create a volume purchasing account. Once enrolled, they can purchase apps on the program’s website - they aren’t using the App Store in iTunes.


It is interesting to see that Apple is now courting enterprises with this B2B App Store. Apple has recognized that employees are using iPhones and iPads also at work. It is much more easier now for businesses to distribute custom apps within their company or to specific partners. Companies are more flexible now to create and distribute apps for enterprise customers that have custom data and process needs.
More info: apple.com Volume Purchase Program - Guide (PDF) Volume Purchase Program - FAQ
I came across an interesting report from 3GVision, the creator of the i-nigma barcode scanner. The numbers show a worldwide growth in mobile barcode usage. The US is leading the growth, but the popularity of barcodes is also increasing in Europe with Germany, the UK and Italy leading this trend. So maybe this is finally catching up outside of Japan?
Top 10 users of mobile barcodes during May 2011: 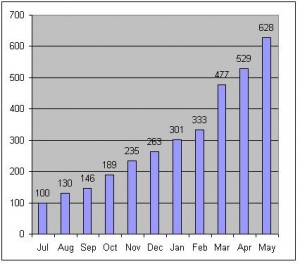 * see below for notes on reporting methodology


As mentioned in the report the mobile barcode usage is increasing in Germany. On mobilemarketingwelt.com I found some interesting mobile marketing campaigns using QR codes (“Quick Response Codes”). Here are some examples how companies already using QR-Codes in their advertisment.
1. Bausch + Lomb - QR-Code, SMS, Mobile Couponing

The pharmaceutical company Bausch+Lomb uses QR-Codes and SMS shortcode in his print ads. By scanning the QR code the user will be forwarded to a mobile landing page where he receives more information about Biotrue, a care product for contact lenses. He also gets a coupon there for a free product sample.
In case the user has no QR-Code reader on his mobile phone he can request a link to the mobile portal via SMS shortcode.

The equipment manufacturer Globetrotter used QR-Codes in his latest print campaign. By scanning the QR code on the advertisement the user will get to a mobile landing page where he receives more information about the reforestation project “Globetrotter VisionsWald”. 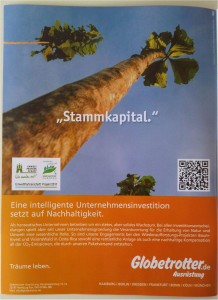 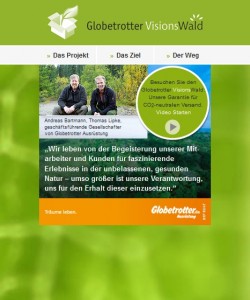 In his latest poster advertising campaign for the new Lady Gaga Album Universal Music uses the U snap App from Wall AG, a value-added app for smartphones, on the German market. The user has to download the free U snap App for iPhone or Android smartphones from the App Store. When starting the app the user can take a picture of the print ad and gets samples from the new Lady Gaga album, can view music videos or win concert tickets, fan packages and CDs.
About 15,000 City Light Posters with the slogan “Fly to Lady Gaga with U snap” accompany the release of the new album “Born This Way”. 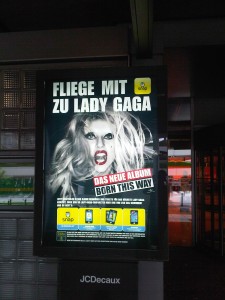 
Many brands and retailers already started using QR-Codes in their marketing campaigns. For example McDonalds, Vichy, Aldi Süd, Tesco etc. The biggest advantage of QR-Codes is that customers get further information about a product fast and easy. They just need a mobile phone with a camera, web access and a QR-Code reader software (e.g. Kaywa Reader, QuickMark Barcode Reader, i-nigma Reader).

There are various opportunities of using QR-Codes. Companies can use them as a direct response marketing tool for print campaigns (call-to-action) or even to sell virtual goods like games, music or ringtones. I think the usage of QR Codes will be increasing in the future and we will see a wide range of usage of QR-Codes in marketing.
Sources: i-nigma mobilemarketingwelt.com U snap Wall AG
* Notes on reporting methodology:

Just a quick reminder: we are holding our first PhoneGap & HTML5 Meetup this Thursday in Frankfurt/Main.

Last year we already held a couple of HTML5 Meetups. This year we want to focus more on the mobile part: mobile development and PhoneGap. Nitobi, the guys from PhoneGap, will support our Meetup group and hopefully we get some cutting-edge insights from the PhoneGap project.

Anyone is invited to join our informal group. We are holding our next Meetup in a Ebbelwoi restaurant in a relaxed atmosphere. Demos or small presentations are welcome. The final location will be announced soon.