In France, Germany, Italy and Spain the most popular mobile social network was MSN’s Live Spaces, which is only available off-portal. That means users were accessing this service through their mobile web browser and not through their operator’s site.
Which services were used the most by which operators?
Helio and Nextel -> MySpace
Virgin, Sprint -> Facebook
Amp’d, AT&T -> MySpace and Facebook
Verizon -> YouTube

These are quite interesting facts and it shows a strong correlation between popularity and being on-portal. Those network operators were pushing these services to their users.
And here’s some more stats about mobile subscriber monthly consumption of content and applications in the US and the UK: 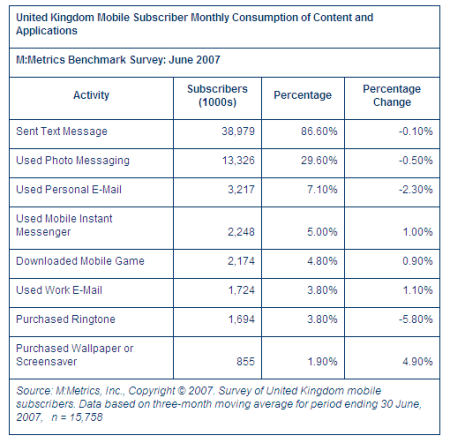 What do you think about mobile social networks - on the mobile web or as applications, on- or off-portal? Are you using them - which one(s)?